Did you know that 2014 is the fiftieth anniversary of the publication of Flat Stanley? Neither did I. In fact I'd never heard of Flat Stanley until I got a package in the mail from some friends of mine. Their daughter was doing a project for school that involved sending paper dolls - "Flat Stanleys" - to people like me all around the country. We were asked to send her photos of our Flat Stanley in action in our everyday context. I had fun with it; I used my Flat Stanley as a bookmark and put him in the box crusher in our warehouse and placed him in various other absurd environments. And that was that. Flat Stanley was originally a book. Fifty years later it still is. But the world is a much different place. In 1964 all the other kids would get their pumped up kicks by running around and playing; by virtue of being flat poor Stanley was left out and had to figure out how to function as a two-dimensional being in a world of three-dimensional activity, engagement and meaningful contact. Not so anymore; these days two dimensions are a luxury, and three dimensions are reserved for video games and movies about robots. Flat Stanley travels the world, meets interesting people, gets his hands and feet dirty, connects otherwise disconnected people to each other; most of our lives, quite frankly, are flatter than he is. So I think it's particularly good news that Mike Frost has published his new book Incarnate: The Body of Christ in an Age of Disengagement. Mike is a missiologist, a student of culture and a theologian with a passion to see the church act in real and redemptive ways in the world. He's concerned about the extent to which a faith system that is rooted in the Incarnation - the God of the universe taking on flesh and dwelling on earth - has capitulated to an increasingly virtual, isolated and apathetic approach to life. The church, he fears, is following instead of leading, and it's well on its way toward what he calls an "excarnate" existence. 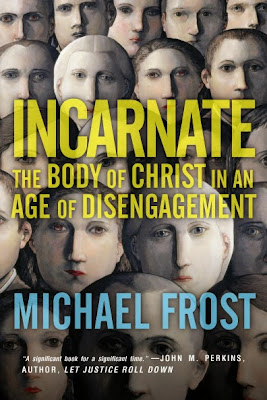 The cover of Mike's book puts the concern in stark relief. Behind a bold, imposing title we see a crowd of lifeless faces, like the assembled tributes in the various districts of Panem before anyone thought of fighting back against the capitol. They're zoned-out zombies, too lethargic to kill and eat. They are, if you will, a bunch of Flat Affect Stanleys, waiting for life to come to them, failing to live in the meantime. When you look at it that way, you start to think, Maybe there's a different way to live ... So I propose, on this fiftieth anniversary of the surprisingly lively Flat Stanley, that we launch our own Flat Affect Stanley campaign. Here's what I envision: 1. I send Incarnate to a friend. 2. My friend takes a photo of Incarnate in a setting that hints at the life beyond the life we've too often settled for. Maybe it's in a garden, maybe it's among a group of friends, maybe it's on the back of a giraffe. Whatever it is, it's real and it's real life, and it's by no means flat. 3. My friend posts that photo to Instagram, or Twitter, or Facebook, or their blog, or Pinterest, or whatever, or all of the above, with the hashtag #NoMoreFlatAffectStanleys. 4. My friend sends Incarnate to another friend. OR 4a. My friend buys another copy of Incarnate and ships it to another friend. (You know you're going to buy it online rather than go to a real live bookstore.) 5. And so on, and so on, and so on ... I think it could be fun. If nothing else, it'll get you out of the house. Who's up for it? First person to contact me using the hashtag #NoMoreFlatAffectStanleys will be the first person I send the book to. I'll take and post a photo myself first. In the meantime, here's a video of Mike talking to Lance Ford about Incarnate.
Email Post
Labels: excarnate Flat Stanley incarnate Incarnation Michael Frost