I heard the news today - oh, boy. A sequel is in the works for The Incredibles, my very favorite Pixar film ever. The Incredibles are a family of "powers," people with exceptional abilities. The parents had been great heroes for a time, until the tide of popular opinion turned against them and they had to go underground. Their children were encouraged to keep their powers secret, until a crisis emerges that draws them out and makes heroes out of all of them. 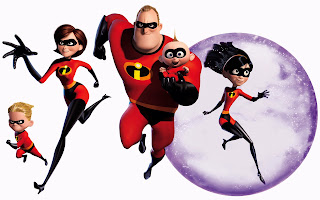 One of those heroes is Violet, the family's oldest child. Her powers are invisibility, and an accompanying ability to generate invisible force fields. She is, essentially, the Invisible Woman, from the Fantastic Four, except that she's a girl - not yet a woman. In my book Comic Book Character I dedicate a chapter to chauvinism in storytelling associated with super heroes, especially in the early days of the genre. Why did women's powers tend to be so passive, so latent? When all the men around her are smashing, burning and stretching past anything that gets in their way, granting a female character the ability to disappear at will is hardly a great leap forward for feminism. But Violet is, for me at least, a different story. She is, after all, a girl - not yet a woman. And she was dreamed up not in the 1960s, the nascent age of proto-feminism, but in the new millennium during feminism's third wave. Moreover, she's a Disney princess, after a fashion, and Disney has nearly a century of hit-and-miss experience telling coming-of-age stories of young women. The writers of The Incredibles gave her those powers on purpose, to tell a particular story. I think there's more to that story. When I've imagined a sequel to The Incredibles (oh yeah, I've imagined it), the story has centered around Violet. What follows is a brief sketch of the story I would tell, if I were at the helm. *** 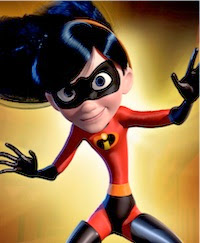 Violet Parr is all grown up. She's graduated from high school and is heading off to college. She and her family are going through all the emotions you might expect: excitement, anxiety, hope, sadness. But they don't have a lot of time to process those emotions, since the new age of heroes they inaugurated has also ushered in a new wave of villains. As usual, Violet has to make her own way out of town and on to campus. This is exactly the sort of thing Violet won't miss. Dash, the charismatic speedster/ prankster, gets the lion's share of the family's attention, and now-toddler Jack Jack demands whatever energy might be left. Violet is tired of fading into the background; she's looking forward to finding her unique place. She finds that place when classes start. One of her professors draws her out of her shell, and when she tells him her secret, he encourages her to be fully her true self. One of her classmates, meanwhile, sees Violet slip up and is in awe of her gifts but perturbed by her seeming repression; she encourages Violet to "lighten up and live a little." But things aren't exactly what they seem. Who has Violet's best interests at heart? Back at home, the Incredibles are down one team member. They're learning in real time, and in devastating ways, how uniquely gifted and extraordinarily capable their daughter is. They miss her, and on a fairly regular basis they worry that they literally can't live without her. Meanwhile, what is Violet becoming? Who is Violet without the Incredibles behind her? And without them, is she still incredible? How will she find her way out of the increasingly dangerous situation she finds herself in? A story of heroes coming of age, of families adjusting to new realities, of a young woman finding herself and sharing what she finds with the world. This is Incredibles II: Violet Rising.
Email Post
Labels: Comic Book Character heroes Incredibles movies Pixar super heroes superheroes Violet