For the past few years, I've managed to find myself in Seattle for Record Store Day. I have the Parish Collective to thank for that (thanks, Parish Collective!); their annual Inhabit Conference takes place in the Emerald City, and probably by accident it seems to perennially land on the same date as the annual ode to the LP. There are, I believe, three record stores within walking distance of the Inhabit Conference, which takes place at the Seattle School of Theology and Psychology. I am confronted by my age when I go, as most of the music is way off the grid, way past my prime. But I go anyway, because records deserve my respect.

This year, however, Record Store Day falls on April 19, the day before Easter, so I'll be home in Illinois. But I'll still try to track down a record store. It just seems appropriate to resurrect this classic musical form. Records were big for me when I was a kid. My brother and I shared a room, which means we shared a stereo, which means we shared records - except the records I acquired when I accidentally committed mail fraud against the entirely innocent Columbia Record and Tape Club, who had graciously offered me eight records for a penny, and who apparently never got the eight dollars and forty-nine cents in cash I mailed them to cover their shipping and handling costs, because eventually they sent a collections agency after my parents for the full value of seventy-some dollars. Mom and Dad went off on that collections agency for taking advantage of a little kid, but they also recognized my culpability and took my records away. (I got them back as a high school graduation present, by which point I was pretty much over Judas Priest and John Cougar Mellencamp.) I would sit in my bedroom listening to albums a lot, like an emo boss. I got a lot of mileage out of Queen's Greatest Hits, for example; I would play the song "Someone to Love," and then I would pick the needle up off the record and plop it back down at the beginning of the track to hear it again. We didn't have a fancy-schmancy repeat button, but we dealt with it. My first record, that I recall, was Freeze Frame by the J. Geils Band. My brother's first record was Pyromania by Def Leppard; my sister's was (I believe) Seven and the Ragged Tiger by Duran Duran. I remember feeling vastly superior to her because by then I was listening to INXS's Shabooh Shoobah, a vastly superior album by a vastly superior band. The most expensive record I ever bought was Sting's live concert double-album Bring On the Night, which cost me about eighty dollars because I got a speeding ticket on the way home from buying it. I had borrowed my boss's car to go get the record, and her license plates were expired, and I wasn't wearing my seat belt, so I'm lucky I got off as cheaply as I did. By the time I went to college, my dad told me I shouldn't spend so much money on records anymore, so I started buying tapes. The end of vinyl as the dominant music delivery system arrived almost simultaneous to my graduation from high school. Maybe that explains my nostalgic attachment to it. It's not musical snobbery: I don't have the purist's appreciation for the superior sound of vinyl, and while I do like the tactile experience of placing a needle on a disc and then flipping it from side A to side B, I also like to press shuffle on an I-Pod and let the robots do the work. But there are some albums that I appreciate as whole pieces, and even though I no longer own one of my favorites on vinyl, and even though I've only ever enjoyed another of my favorites on cassette or Spotify, I still think of those albums as LPs - "long plays" - making music at thirty-three and a third rotations per minute. Here are ten of those special cases, hurriedly assembled in an order that could change at any moment. 10. The Beatles, Let It Be. Sure, Phil Spector went a little overboard on the "sheets of sound" for a few of the tracks, but it starts ("Two of Us") and ends ("Get Back") so perfectly, and all four Beatles are firing on all cylinders. Plus Billy Preston on the keyboards. What a way to end an era. 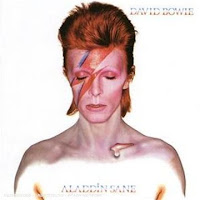 9. David Bowie, Aladdin Sane. I had a giant Aladdin Sane poster hanging in my dorm room. This album features my favorite Bowie song, "Panic in Detroit" - and for me to call a Bowie song my favorite is saying a lot. 8. Genesis, The Lamb Lies Down on Broadway. So good. I used to only listen to one of its four sides, but now I'm hooked from start to finish. Read the liner notes; total head trip. 7. U2, War. I think this was my first exposure to U2. It's the only one of their early albums I can't get enough of. 6. Stewart Copeland, The Equalizer and Other Cliffhangers. I knew a drummer in Des Moines, Iowa, who thought Sting was an idiot because he walked away from the greatest drummer in the world to pursue his solo career. Copeland's music is signature and cinematic; I often jump straight from this album to his score for the movie Rumble Fish.

5. The Police, Ghost in the Machine. Speaking of Sting and Stewart Copeland, I first fell for the Police when I saw the video for "Every Little Thing She Does Is Magic." I decided I would totally hang out with those guys. And that's pretty tame compared to "Demolition Man" and "Hungry for You." So good. 4. Taj Mahal, The Best of Taj Mahal. My high school friend and band mate Dan Woolis gave me this album, I think as a graduation present. So much better than Judas Priest. A very folky kind of blues.

3. Squeeze, 45s and Under. This is the album I only ever had on cassette. But Squeeze immediately became my favorite new wave band. Songwriters Glenn Tilbrook and Chris Difford were often compared to John Lennon and Paul McCartney; I don't know about that, but they were crazy with the wordplay. As greatest hits collections go, this one is missing several tracks, but the ones that made the cut are awesome, and when I hear them in a different sequence, I get a little confused. 2. Led Zeppelin II. I suppose everyone has a favorite Zeppelin track off this album. For me it's "Ramble On," which I liked long before I realized it was borrowing from The Lord of the Rings. But start to finish, a great album. 1. Fleetwood Mac, Rumours. It's no surprise to me that this is the album Fleetwood Mac is known for. I actually prefer to listen to it on vinyl. Not sure why, but it feels only appropriate. That's my list. What records make your list?
Email Post