Change the Conditions of the Test: The Gospel According to Captain Kirk

I think my world changed forever in 1982. That's when I saw the movie Star Trek II: The Wrath of Khan. Everything I needed to know crystallized for me then:

Self-sacrifice was made real and noble in the person of Mr. Spock, as he entered an irradiated engine room to save the Starship Enterprise and everyone on it, an act that resulted in his death. Evil was personified, ironically, in the person of Mr. Rourke from Fantasy Island, when he put a monstrous insect in the ear of the perennially honorable Pavel Chekov. Primal rage was personified in the notoriously overdramatic Captain Kirk as he howled "Khaaaaannnnn!" like he was John Lennon in a therapist's office. Hope was personified by Captain Kirk as well, however, when we learned an insight from his backstory in the opening scene, as he watched a new Starfleet captain undergo - and fail - the legendary Kobayashi Maru. 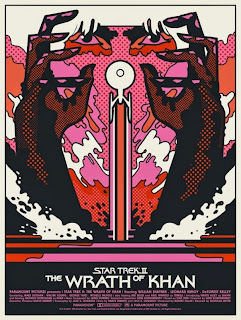 The Kobayashi Maru was a test given to every would-be Starfleet commander. It simulated a no-win situation that would inevitably result in the destruction of a ship and the death of everyone on board. It tested the commander's capacity to lead even when forced to abandon hope, to shepherd people into a dignified death. It prepared people to surrender to the inevitable and to appreciate their mortality. Some people, however, are unwilling to appreciate their mortality, constitutionally opposed to the abandonment of hope. Such a person is Captain Kirk, who - alone among the hundreds of Starfleet commanders who faced the Kobayashi Maru - came out alive, with a functioning starship and a breathing crew. Kirk refused to accept that there is such a thing as a no-win scenario. So he "changed the conditions of the text." And he beat the system. And he became the second-best Starfleet commander in the history of the franchise. (Nerd alert: I favor the next-generation Captain Picard.) The 2009 franchise reboot Star Trek portrays Kirk's Kobayashi Maru experience in full color: we see his annoyance and frustration that he's being so artificially constrained by the fatalism of Starfleet; we see the mechanics of his manipulation of the test; we see the glee on his face as he enters the test again, knowing that this time he'll emerge triumphant. We even see the perturbation of the stubbornly logical Mr. Spock as he realizes that Kirk has not only cheated the test but cheated death. We see, in Spock, what happens when people do not avail themselves of hope; we see, in Kirk, what happens when we allow ourselves to be calibrated to it. *** Hope is one of the three primary colors of Christianity. The apostle Paul tells the Corinthian church that hope alone (with faith and love) endures forever; everything else - our acts of righteousness, our demonstrations of power, our body of knowledge - ultimately fades. Conversely, without hope, everything loses its luster. Even victories are hollow, and death isn't the only thing that seems final. That's hope as artifact, and that's often how we think of it - as this discrete, static consumable that we acquire and use until we've used it up. Hope under this view is a fossil fuel, and when we're out, we're out. When we think of hope as a primary color, however, the landscape changes. Hope underlies everything at that point; hope commingled even with such elements as despair and disillusionment, hope pollinating cynicism and fatalism. When we presume hope is present, we look at our situation differently, and we see increasingly clearly that every test has conditions that can be changed; no situation is no-win. This is, frankly, not my strength. I take things as they are, by and large, and when they're not as I like them, I take them with more than a grain of salt. But I can't shake the memory of the Kobayashi Maru, that fateful exercise which everyone assumed to be a necessary lesson - all of us are dust, and to dust we will eventually return - but which Captain Kirk exposed as only a piece of a larger puzzle that involves death's defeat. I also can't shake the inherent need to look for hope. It's an act of faith, really, which is another primary color of Christianity, a predisposition to assume that the God who orchestrates and oversees the general workings of our collective experience is, underneath it all, love, and thus love drives the engine that drives creation. The apostle Paul calls love "the greatest" of Christianity's primary colors, in that it vindicates faith and inspires hope, in that it conquers death and changes the conditions of every test. Faith, hope and love. In a universe infused with these three, no situation can be no-win. *** A key subplot of Star Trek II: The Wrath of Khan is the development of the Genesis device, a technology that converts uninhabitable planets into thriving ecosystems. It stinks of Boomer hubris and the superiority of human ingenuity over the genius of nature, but whatever. The device works by reorganizing matter, so to get in the way of Genesis is to get yourself killed. Kirk and his crew narrowly escape that fate when Spock sacrifices his life to usher the Enterprise out of the path of the device. Spock's dying words are a model of noble death: "The needs of the many outweigh the needs of the few, or the one." But no good steward of a successful franchise like Star Trek would allow a cash cow like Spock to remain dead, so of course the sequel is subtitled The Search for Spock. Buried in space, Spock is exposed to the work of the Genesis device and reconstituted - resurrected. Even Spock the skeptic cheats death. In Kirk's latest no-win situation, everybody wins. I have no idea why I've got Star Trek on the brain today, but I'm glad I do. I'm temperamentally predisposed to see any situation as some iteration of the Kobayashi Maru. I resign myself to it and settle in for it. But when I remember hope, I remember Captain Kirk, and I see my situation differently. I change the conditions of the test, and on the best days, everybody wins. 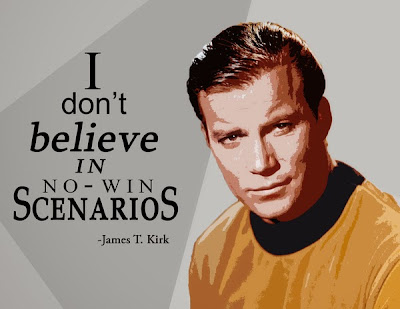