I recently gave a presentation on discipleship in the missional church to some friends at Forge Chicago. Here's part four of that talk. (It was really long . . .) You can read part one here, part two here and part three here. ***

The third step in Jesus' movement strategy, according to Steve Addison in his What Jesus Started—sharing our lives and our good news—is a discipline of boldness. We train ourselves not to shrink back from speaking God’s good news in this new setting, not to be afraid of the power God wants to demonstrate in us. We might gather to ask God for such power, such boldness. We might do physical exercises, from breath prayers to yoga to running, to make us more aware of our bodies, the space they occupy, and the energy they contain. And then we scatter to be bold in places where boldness is risky. We speak God’s good news to people who have come to think of God and his messengers as bad news. We act in public as though God is in us. 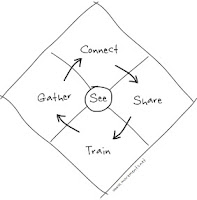 The fourth step is training, which involves disciplines of study and communication. We drill down deep into the gospel, coming into ever fuller understanding and appreciation of the God we follow and the mission we’ve embraced for ourselves. This step is familiar; it’s the most well-practiced of the steps in the church of the Reformation, of the Enlightenment. At least the side of the equation that involves drilling down into the gospel is familiar; the mission has, I think, been neglected as the church has focused so heavily on doctrine and dogma. So the challenge is to scatter these disciplines, to imagine study and communication as a missional enterprise. Andy Root, a theologian at Luther Seminary, has recently written the book Taking the Cross to Youth Ministry; there he does a good job of imagining how conversations about the gospel might look if they were unshackled from the catechism of Christendom, as in this contrast of youth pastors Kendall and Nadia as they think about the unconventional youth group kid Justin:

For Kendall, discipleship was static. . . . He construed discipleship to be about assimilation of knowledge rather than participation in God’s own action. Bringing Jesus to kids assumes that Jesus is inert, a product or idea that kids need to follow, rather than a person who encounters them. . . . Since Justin did not speak the language, in Kendall’s view, he couldn’t be a disciple. But Nadia had witnessed Justin seeking for the action of God. She had seen him open up what was dead in his life and seek for God to bring it to life. . . . Nadia believed Justin was skeptical of happy shiny Christianity, which, because of his own impossibility he knew he could never measure up to. . . . Discipleship . . . is seeking to participate in the action of God from the core of one’s own being; it is to seek for God where God can be found.

This center-set approach to discipleship is our calling as Christians: not to sell a product or to retain members or to ascertain who’s in and who’s out, but to make disciples. The fifth step in Addison’s template is gathering, which might seem like a challenging step to scatter. It is worth noting, however, that Jesus’ movement was not opposed to gathering people; Jesus himself said that he longed to gather his people together, as a hen gathers chicks under her wing. Gathering for a missional church is a discipline in itself; the author of Hebrews had to remind her audience not to give up meeting together so they could encourage one another toward love and good deeds—the demonstration of the kingdom of God. The sixth step is the reward for the first five: the multiplication and extension of the church is the natural outcome of the disciplined practice of seeing need, connecting to it, sharing with those around us, training them in the ways of God, and gathering them into mutually supportive groups. Where the church has made a habit of these five things, it has grown; where it has let them slide, it has atrophied. Even this, however, is a discipline, since the temptation in the wake of such multiplication will be to bring it to order, to bureaucratize it, to carve out space for it. Multiplication, however, is a matter of scattering: like Abraham parting with Lot because they had grown too large together, the wise course is to resist the temptation to stay gathered and make gathering easier, and instead to discover the margins that this gathering has created and seek out the need there, and begin the cycle all over again in a new context. *** On Wednesday I'll post part five of this series, where we'll consider how the question "What do you want?" serves the purposes of missional discipleship. In the meantime, what do you think of Root’s definition of discipleship: “seeking to participate in the action of God from the core of one’s own being; it is to seek for God where God can be found”? What's good about it? What's lacking in it? What's your definition?
Email Post