Moron Making a Scene: David Byrne on How Christianity Works

In a previous post I recounted the eight priorities of making a scene, according to Talking Heads frontman David Byrne in his recent book How Music Works. Based on his observations of the 1970s hub of groundbreaking music, CBGB in New York, these elements of a scene interest me as a (former) musician. I welcome innovations like those that took place at CBGB, launching such interesting and unique artists as Blondie, the Ramones and Talking Heads. I wonder if a similar gestation to that of CBGB is what led to the recent rise of innovators such as Arcade Fire, Avett Brothers and the Lumineers, whose sounds all overlap in my imagination. But I'm actually more interested in the elements of a scene as they apply to new directions in the life of the Christian church. That's where my energy goes these days, after all: as an editor of Christian books I'm compelled by what's new and fresh, intrigued by the people who look and act different from the churches of my youth but who nonetheless stand in the continuous Christian tradition and, I think, are setting its course for the future. 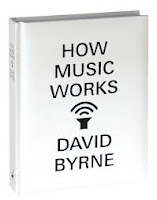 Byrne follows his chapter on making a scene with a chapter on how music shapes culture. Here he rants considerably on the hegemony of classical music and other genres tied to Western modernity and the Industrial Revolution. (Arguably the forms of church that have been handed down to us have similar ties.) Classical music gets underwritten by the people populating the halls of power, but it creates only a small cadre of virtuosos who commit themselves totally to the genre, on one hand, and an ever declining class of passive consumers of the genre, on the other. The bar is set too high for the general populace to participate meaningfully in classical music, just as (possibly) the bar is set too high in the church of modernity for people to embrace membership in it. Meanwhile, "popular" music sets the bar much lower and feels no loyalty to the constraints placed on pedagogy by classical music education. Children are encouraged to play around with instruments rather than being rushed into scales and arpeggios. Students pluck out melodies and tease out harmonies by ear and experimentation rather than first learning to read and score music. In the process children are learning less about appreciating music and more about making something, which they ultimately come to appreciate on their own. Along the way they learn to collaborate and cooperate with one another, to give artistic expression to the feelings they otherwise might struggle to convey, to relate to their environment in ways that are harmonious and, consequently, redemptive rather than consumeristic and competitive (and too often, consequently, violent). I'm sure an apologist for classical music would go hard after Byrne for his hagiographic write-up of popular music. It's not the Messiah, after all--neither the Messiah of classical music nor the Messiah of Christianity. But for those of us who do follow the Messiah (see what I did there), Byrne's argument raises legitimate questions for how we practice and propagate Christianity in a postmodern era. So, here's how I might apply Byrne's eight elements of making a scene to contemporary discipleship and spiritual formation. I'm sure I'll have more to say (and I hope you will too), but here's a quick send-up: These are my thoughts. I'm sure there are more to come. In the meantime, to see a scene up close, check out Mark Scandrette's Jesus Dojo in San Francisco. He's one of many who are doing something different.
Email Post

KlamMan said…
I just read this and I love all these ideas. Speaking as a pastor if a local church I desire to see the Church of Jesus become less an insiders club and more of an communal hangout. I would like our church to be considered less a Big Show ( think Rosemont Theater) and more an after party hang out where you can talk honestly and still catch the scene (maybe like a booth at CBGBs). David Byrne has some genius insights and Dave has some great parrellels.
6:51 PM