I was recently asked to lead a discussion about discipleship for the Chicago residence for the Forge Mission Training Network. I love those Forge people--they think about the church in really fresh, really energizing ways. They're lots of fun too; I feel cooler by virtue of hanging out with them. But I was a little anxious about leading a training session for them. Nevertheless, I had a good time, thanks largely to the conversation that came as a result of my very long talk. Here's the first installment. More to come. *** When I was a kid I was desperate to be a professional musician. I played the saxophone. I wrote melodies. I joined the best David Bowie cover band in the entire state of Iowa. I wrote an essay for my college applications in which I named myself “Sax man.” I declared my major to be music. I did everything it takes to be a professional musician except practice. 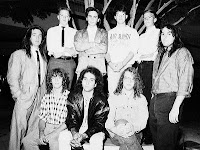 Two weeks into my college career I determined that I didn’t want to practice enough to be a music major. I might be willing to practice enough to be a music minor, but that would be pushing it. I continued to play in a band, and we did pretty well in terms of how many gigs we got. But once I got out of college my musician days were numbered; my opportunities for performance very quickly dwindled when I got into the real world and had to compete with performers who practiced. Before too long the only place I was fit to play was at church. Soon even that field dried up. It’s now been about nineteen years since I’ve played. Probably twenty or more years since I practiced. Now, I’m not the only person in the world who used to be a musician. Most people don’t quit because they’ve run out of places to play, however. Lots of people quit being musicians when they run out of places to practice. You remember practice, I bet. Scales and arpeggios, eight-measure sections over and over and over again. Conductors stopping and starting and stopping and starting. I hated it with a passion; that’s why I kept blowing it off and seeking out bands that would let me play without doing it. But for many former musicians, practice was the extent of their musical experience—school bands, daily or weekly rehearsals. Playing for an audience was the rare exception; one performance a semester if you were lucky. Many former musicians stopped performing long before they stopped practicing. Music for them became insular, technical, bureaucratic. It ceased to be play. And eventually, it ceased to be worth it. Play and practice—these are the two pieces of the puzzle of musicianship, among many other activities. All play and no practice is a mark of low commitment and weak execution. Your performance goes nowhere, affects no one. You cease to be a musician, even if you’re still playing regularly. Practice is important. But practice isn’t the whole story either. Practice is really meant to be preparation; it’s a means to an end, with the end being performance. Without performance—without play—what’s the point of making music in the first place? It goes nowhere, affects no one. In these respects, music and discipleship have a lot in common. Discipleship, the active participation of the Christian in the life and mission of Christ, is a matter of preparation, of practice: we familiarize ourselves with the teachings of Jesus, the way that he calls us to be in the world. The church has done pretty well in this regard over the centuries—and particularly in the age of enlightenment. We have focused on doctrine and dogma that engages our brains, offering us means to resist the encroaching doubt of a scientific age that refuses to accept mystery and yet lusts hard after it. The work of the church in the modern age has been focused on chasing down certitude and holding it tight. Even spirituality has followed this path. The task of engaging and shaping our spiritual selves has been centered in the intellect, a private outworking of the logic of God in us. We read Scripture, pray, fast, meditate, practice Sabbath. When we’re together we sing, pray, listen to the Word preached, fellowship with one another. Whether our spiritual practices are personal or corporate, they’re turned inward, removed from the world God created. The church of the modern era has been mostly practice and little performance. All preparation, no play. And yet discipleship is not simply a matter of private practice, not merely a matter of guarding ourselves in our spirits against the corruption of the world. Nor is it merely a matter of the ecclesial life where we offer each other encouragement to not be tainted, to not lose our faith, as we necessarily brush up against heathens Monday through Saturday. No, discipleship is also a matter of performance, of being followers of Jesus in arenas where Jesus is largely not followed—admired, perhaps, even sometimes studied and even sometimes adored, but not followed. If Jesus were being followed, things would look differently, wouldn’t they? Business decisions would be made differently, politics would be negotiated differently, conflicts would be settled differently. Neighborhoods would look different. Cities would look different. Economies would look different. Everything would look different. That’s a lot of pressure, isn’t it? No wonder the church has been so preoccupied with practice. But like music, the performance of discipleship isn’t just a task—it’s not just practice in public. It’s also a matter of play. Following Jesus in the world is actually the only good reason for practicing discipleship alone and in our Christian enclaves. Having learned to see the world differently, we get to go out into the world and give it a new name, show it a better way, live in it in ways that ignite the imaginations of those who watch. God has given us the privilege as disciples to play in the world he made. In this respect discipleship, like music and like the body of Christ itself, is a combination of gathering and scattering. We are not absolved from retreating from the world in order to refocus our imaginations on what Jesus tells us about himself, ourselves and the world. Neither, however, are we excused from re-entering the world to tend to Jesus’ vision for the world taking root and sprouting into new life. We practice, we play; we play, we practice. *** Think back on a childhood experience or activity that involved both practice and play. Maybe it was music, or drama, or sports, or debate, or Awana. Which aspect was more compelling to you—play or practice? Which tended to dominate? Are you still engaged in that activity? Why or why not?
Email Post