I wrote the following about two years ago, when former Illinois Governor George Ryan was seeking early release from prison to attend to his dying wife. He was released yesterday and is now on house arrest till the full term of his sentence ends sometime this summer. 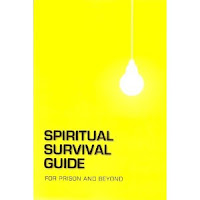 On the same day Ryan was released I got together for coffee with my friend Fred, a pastor and volunteer chaplain at Stateville Prison in Joliet, Illinois. Fred wrote a book for inmates, Spiritual Survival Guide, which I helped him get into print. Every few weeks he takes a team to the processing center for new inmates and passes them out. Having met some of the inmates Fred quotes, and having handed some new inmates Fred's book, I've developed complicated feelings about the penal system in the United States. Governor Ryan, I suspect, has similar discomfort with the system and, I hope, could lead a truly constructive conversation about how it could be reformed. Time will tell; for now, he's sitting at home, finishing his time, coming to terms with the past five years of his life and the decisions that precipitated them. I'll say a prayer or two for George Ryan, and for the folks who aren't so fortunate to serve their time at home. *** Former Illinois Governor George Ryan is still in prison. He was denied his request for a new trial, based on changes to "Honest Services" laws imposed by the Supreme Court, and to be allowed to live free during the retrial to attend to his dying wife. The details of Ryan's conviction are complex, amounting to abuse of office while he was Illinois Secretary of State that resulted (somewhat indirectly) in the accidental deaths of six children. His wife Lura's cancer has spread throughout her body, and she will likely die in a matter of months.

Governor Ryan could not seem more different, on the surface at least, from his successor and fellow convict Rod Blagojevich. Ryan looks like a stereotypical Republican--old, white in hair and skin, stocky and suity; Blagojevich looks like a Chicago Democrat--young and healthy, with bushy dark hair and mildly progressive white skin, with an inexplicable optimism and an aura that invites suspicion or derision, depending on the context. I've never really liked Blagojevich; I never really liked Ryan either, but I feel more sympathy for Ryan than for Rod.

Ryan, for one, has served time. He's in prison and dealing with it. He has been since 2007. Also, his wife is dying, and he can't get to her; she can get to him, of course, but she's unwell and they're separated by a state and a penal system. It's hard not to feel for a guy who has to endure these extreme hardships--including watching his wife die from afar--in the public eye.

Beyond his current situation, I'd like to suggest that Ryan handled his scandal better than Blagojevich. Rod became a national laughing stock in the wake of his arrest, embarrassing himself on talk shows and reality television--even making a commercial for pistachios, of all things. After his scandal broke, by contrast, Ryan became a national leader, declaring a moratorium on the death penalty in Illinois and commuting the sentences of all Illinois death row inmates, and visiting Fidel Castro in defiance of a national embargo on Cuba. Both were reasoned acts that provoked nationwide conversations; the closest Blagojevich came to such statesmanship was a showy offer of free public transportation for senior citizens, which many didn't need and which deepened state debt and nearly undid the public transportation system for everyone.

So I think of Ryan as a governor, and Blagojevich as a politician. That doesn't mean I think Ryan is innocent of the charges he was convicted of, nor does it mean I think he's incapable of playing politics. Ryan is unique among people in the prison system in that he can appeal his situation not only to the courts but to the public. He has a willing accomplice in the media, many of whom are now old family friends by virtue of his career in politics and their career in news. They also have their own interests: there's value in milking a story as prolific in human drama as Ryan's, from the kids that died to the cancer that's killing his wife. We follow this drama not because Ryan is an inmate in federal prison but because he knows the right people to play, the right buttons to push.

There are doubtless countless other inmates in prisons throughout the country who face the loss of loved ones while they're inside; they have no reporters visiting their cells or their loved ones' hospital beds. Prison is a desolate place, with so much attention given to keeping order that little time or energy is left for tending to the hurting. I don't blame the guards or the wardens or anyone for that; it's the system we want, I think it's fair to say. We just don't want to admit we want it.

We feel bad for Ryan because we know who he is; we feel nothing for most inmates because we don't know who they are. Ryan is asking for clemency and special treatment; I'd love to see him lead again, to tell his story not as a plea for special circumstance but as an illustration of a fundamental flaw in how we dispense justice. I'd love to see Ryan show solidarity with his fellow inmates, to use the power available to him to provoke a national conversation again, to help us figure out how to acknowledge the humanity of the convicted--with all the relational complexity that attends to it.

So, while I'm not a fan of George Ryan per se, I'll be praying for him this Christmas, him and those like him who are separated from their loved ones for reasons we understand. I'll also be praying for me and those like me who don't like crime but are uncomfortable with our current system of punishment.
Email Post
Labels: Crime and Punishment George Ryan Prison Rod Blagojevich