Every year on Martin Luther King Day I read a letter to white clergy that he wrote while imprisoned in a Birmingham, Alabama jail. I read it for its historical significance; last April it turned fifty years old, and it was followed in King's canon a few months later by his "I Have a Dream" speech during the 1963 March on Washington. The letter marks a pivot point; King was no longer ignorable to the national white majority, and meanwhile the Civil Rights Movement itself was beginning to lose patience. You see hints of that percolating impatience in the letter, written in response to a letter from white clergy criticizing the methods of King and his colleagues as disruptive and agitating. You can taste King's frustration in his letter--I imagine earlier drafts whose sarcasm and accusation are given their visceral vent, before King wisely considered that he wasn't writing only for these short-sighted and weak-willed clergy but for history. I imagine him yelling, even punching the wall of his cell, before eventually composing and editing himself. When I imagine the letter in this way, my eyes begin to compensate, and I begin to see myself not in the people King praises (people like Atlanta Constitution editor Ralph McGill, who I'm proud to say is my wife's great-uncle) but rather in the people King reproves. I like love. Some days I even love love. Having not lived in the 1960s, I have a somewhat fantastical nostalgia for the Summer of Love and the ethos of love that I paint on the era. In my imagined history, everyone is MLK or Bobby Kennedy or John Lennon or even anachronistic exemplars like Gandhi and Jesus. Set against them are a very few nefarious, mustache-twisting, love-hating villains like Bull Connor and the like. In my imagined history, I side unswervingly with the Kings, the Kennedys, the love people. In my mind I'm on the right side of history. 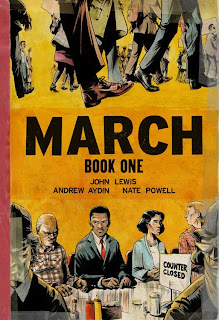 But history is never so neat. When I'm honest with myself, I easily imagine myself doing nothing or saying nothing in the face of racial inequality. Even worse, I imagine myself resenting the movement for civil rights as it disrupts my precious status quo, as it presses against the privilege I enjoy as a white man of reasonable means, as it makes my day-to-day existence slightly less comfortable, as it forces me to acknowledge the reality of racial violence and systemic injustice. When I'm honest with myself, I hear King's frustration pointed at me. Having ears to hear, however, is a good thing. Even as it problematizes the present, it makes a better future possible, even inevitable. So today I'll reflect on King's more confrontational passages from his Birmingham letter, and I'll invite God to confront me where I make other people wait for rights that I enjoy without cost, to shake me out of whatever appalling silence I'm indulging and back onto whatever right side of history I've wandered off.

Perhaps it is easy for those who have never felt the stinging darts of segregation to say, "Wait." But when you have seen vicious mobs lynch your mothers and fathers at will and drown your sisters and brothers at whim; when you have seen hate filled policemen curse, kick and even kill your black brothers and sisters; when you see the vast majority of your twenty million Negro brothers smothering in an airtight cage of poverty in the midst of an affluent society; when you suddenly find your tongue twisted and your speech stammering as you seek to explain to your six year old daughter why she can't go to the public amusement park that has just been advertised on television, and see tears welling up in her eyes when she is told that Funtown is closed to colored children, and see ominous clouds of inferiority beginning to form in her little mental sky, and see her beginning to distort her personality by developing an unconscious bitterness toward white people; when you have to concoct an answer for a five year old son who is asking: "Daddy, why do white people treat colored people so mean?"; when you take a cross county drive and find it necessary to sleep night after night in the uncomfortable corners of your automobile because no motel will accept you; when you are humiliated day in and day out by nagging signs reading "white" and "colored"; when your first name becomes "nigger," your middle name becomes "boy" (however old you are) and your last name becomes "John," and your wife and mother are never given the respected title "Mrs."; when you are harried by day and haunted by night by the fact that you are a Negro, living constantly at tiptoe stance, never quite knowing what to expect next, and are plagued with inner fears and outer resentments; when you are forever fighting a degenerating sense of "nobodiness"--then you will understand why we find it difficult to wait. ... I have almost reached the regrettable conclusion that the Negro's great stumbling block in his stride toward freedom is not the White Citizen's Counciler or the Ku Klux Klanner, but the white moderate, who is more devoted to "order" than to justice; who prefers a negative peace which is the absence of tension to a positive peace which is the presence of justice; who constantly says: "I agree with you in the goal you seek, but I cannot agree with your methods of direct action"; who paternalistically believes he can set the timetable for another man's freedom; who lives by a mythical concept of time and who constantly advises the Negro to wait for a "more convenient season." Shallow understanding from people of good will is more frustrating than absolute misunderstanding from people of ill will. Lukewarm acceptance is much more bewildering than outright rejection. ... We will have to repent in this generation not merely for the hateful words and actions of the bad people but for the appalling silence of the good people.

*** In case you missed it over the weekend, I posted a video of Peter Gabriel singing "Wallflower," his profound and achingly beautiful tribute to people whose refusal to wait for justice causes them to suffer. You can watch the video here.
Email Post