Let Your Spirit Be Unbroken

I was in a meeting today where someone shared the story behind Vincent Van Gogh's Mulberry Tree. He painted it while institutionalized; apparently the vividness of his painting was his own imagination, since he was hospitalized during the late fall. 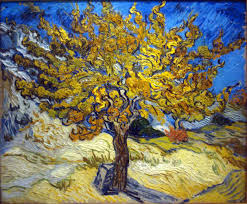 The story reminded me of a song I listened to over and over and over again while I was in college: "Wallflower" by Peter Gabriel. I was under the mistaken impression back then that it was a song about his own time in an asylum, when in fact it's a tribute to the political prisoners of South Africa and other tyrannous governments back in the 1970s when he wrote it. Whatever it was about, I felt understood by it. I was a bit self-pitying back then. Anyway, the song still holds up, and perhaps you'll feel understood by it today, whether your sense of oppression is political or professional or psychological or spiritual. It's a bit early for a Martin Luther King Day post, but this song would certainly could have been sung to him.
Email Post