The First Joke That Occurred to Me

For the young male evangelical would-be writer--maybe further differentiated by a quality of unmasculine whimsy and melancholy--there is a standard progression: starting with C. S. Lewis, of course, and then proceeding to Frederick Buechner and eventually arriving at G. K. Chesterton. There are other luminaries along the way, and not every young male evangelical would-be writer's path is identical to all the others, but I feel confident that these three are common touchpoints for all of us-I-mean-them. This has certainly been the case for me, at least. I did my duty with Lewis, reading a couple of short books by him (including only a few of the Chronicles of Narnia, I confess) before falling hard for Buechner--his soulful, mournful essays, his pithy, incisive insights. I stole some writing tics from him for a while before I realized that it did him no good and made me sound pretentious. But I soon thereafter landed at Chesterton, and I never really left. 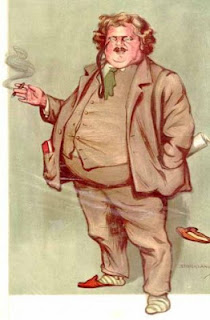 Something about Chesterton grabbed me right away. I realized quite quickly that he started and ended every thought with a laugh. After the prim propriety of Lewis and the sad sobriety of Buechner, I was more than ready for that. And yet that lightness in Chesterton didn't translate into a superficiality or vanity that so often characterizes humor, and neither did it descend into cynicism and scornfulness as does so much humor of my own time. Chesterton took on his intellectual opponents with gloves off, and he pegged them square on the nose with every shot, but those hits were delivered as punches on the arm, slaps on the back: they were predicated on love and received as affection. The people he debated felt appreciated and understood, the world he described for his readers was rendered both more relatable and more ineffable. I find that humor is rarely given its due. No Oscars for Bill Murray, for example, and a film about Batman or the Terminator is more likely to earn a best picture nod than a film about fundamental absurdities. And yet worlds are conquered, tyrants deposed, wounds are healed less often by vigilantes and apocalypses and far more often by way of a good laugh. Chesterton understood that, and that gives me hope. I'm reading about Chesterton in Buechner's Speak What We Feel, Not What We Ought to Say, which means that Chesterton's lightness is getting a bit of the heavy treatment. But I think that's a good thing: until honor is bestowed by the sober-minded, a clown remains only a clown. By placing Chesterton (and fellow wit Mark Twain) alongside Shakespeare and Gerard Manley Hopkins, Buechner reminds us that you don't have to be dour to be brilliant. Buechner quotes at length a letter from Chesterton to the woman who would become his wife after the death of her sister:

I, for one, have sworn, by the sword of God that has struck us, and before the beautiful face of the dead, that the first joke that occurred to me I would make, the first nonsense poem I thought of I would write, that I would begin again at once with a heavy heart at times, as to other duties, to the duty of being perfectly silly, perfectly trivial, and as far as possible, perfectly amusing. I have sworn that Gertrude should not feel, wherever she is, that the comedy has gone out of our theater.

I understand this, and even more I feel understood by this. We honor the dead, we honor the living, we even honor life and the giver of it, by whatever lightness we can muster. That doesn't excuse us from fighting for the good, from taking the wrong and the evil and the destructive to task. But it does set a tone for life that is itself life-giving.
Email Post

essay-writings-service.com said…
I am very enjoyed for this blog. Its an informative topic. It help me very much to solve some problems. Its opportunity are so fantastic and working style so speedy. I think it may be help all of you. Thanks a lot for enjoying this beauty blog with me. I am appreciating it very much!
10:20 AM