Time in Sounds, Shadows and Scents

Maybe it's the beginning of a new year; maybe it's the looming milestone birthday of my mother or the retirement of the coworker who hired me sixteen and a half years ago. Maybe it's just force of habit. But I've been thinking a lot recently about the passage of time. I've always had a thing for time. Kind of a love-hate thing, I suppose: I lie awake some nights anxious over what it will be like to be seventy, but I can't help myself when I stumble across stuff that deals with time as a concept. My first posts to Loud Time, for example, were three installments of "A Prayer About Time" by Australian theologian Robert Banks (here, here and here). Here's a little taste of that poem:

God our Father, you are not so much timeless as timeful, you do not live above time so much as hold "all times . . . in your hand", you have prepared for us a time when we will have leisure to enjoy each other and you to the full, and we thank you, appreciate you and applaud you for it. 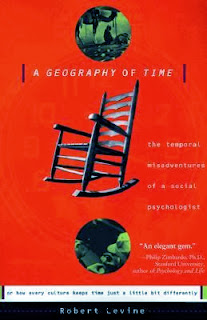 Right now my time-obsession is being enabled by Robert Levine's book A Geography of Time: The Temporal Misadventures of a Social Psychologist, or How Every Culture Keeps Time Just a Little Bit Differently. The book is nearly twenty years old, which makes it a bit quaint--it's always interesting to read social psychology or other social-scientific inquiry from a bygone era, and this particular bygone era doesn't take into consideration the fact that most of us have replaced wristwatches and wall clocks with smartphones and tablets. (Seriously: so far he hasn't even mentioned the Internet.) But I'm really liking his historical content, which sets up nicely the contrast between Western-industrial age conceptions of time and non-Western equivalents. For one thing, whereas we Westerners perceive time as something objective, authoritative and, I don't know, looming, other cultures have a more tactile, almost sensual appreciation of time. As just a few examples:

The Chinese developed an incense clock. This wooden device consisted of a series of connected small samesized boxes. Each box held a different fragrance of incense. By knowing the time it took for a box to burn its supply, and the order in which the scents burned, observers could recognize the time of day by the smell in the air.

Not to be outdone are the Natives of the Andaman jungle in India, who "have constructed a complex annual calendar built around the sequence of dominant smells of trees and flowers in their environment. When they want to check the time of year, the Andamanese simply smell the odors outside their door." The sundial manipulated sunlight to track shadows over the course of a day, "while water clocks [slowly dripping water from one bowl to another] marked the hours of night." This was the way of the Western world "for most of recorded history," until the invention of the mechanical clock, designed

to simply sound bells at the appointed prayer hours. Most of these early clocks, which became community centerpieces, didn't even have hands or hours marked on their faces. They were designed not so much to show the time as to sound it.

Sounds, shadows and scents. I like that. For most of our history time was more servant than master, more companion than overlord. Levine suggests that until we began imagining ourselves accountable to time, rather than occupiers of it, the word speed didn't exist. "For most of human civilization there was no way to insure being punctual even if one wanted to be." That's certainly no longer the case. Time stares us in the face these days; it confronts us at every turn, with the cold stare of a sans serif font or the magisterial conceit of roman numerals. The only sound time offers us anymore is not the organic drip or the resonant gong but the steady march of what Harlan Ellison calls "the Ticktockman" and the occasional ping of our iCalendars. Time has ceased to be organic; it's been outsourced to the technological powers that be. I'll surely write more about this book. But for now I'll leave you with a more recent lament--one that, ironically enough, I always enjoy hearing.
Email Post