I get it. I really do. Ever since I was a kid I've heard the arguments about Hollywood's fetishizing of violence and the desensitization it may wreak in young, impressionable (typically male) minds. I've read some of the works of the great champions of non-violence. I've opposed state-sanctioned torture and covert acts of aggression. Some of my best friends are peace-loving hippies. I get it. I really do. But I still like 24. A lot. 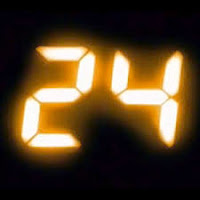 I'm on what I think is my third tour through all eight seasons of 24's first run on TV. I'm about to finish season four. I had hoped to finish all eight before this year's reboot of the series started, but I had some unanticipated travel that ate into my viewing time. Thanks, work. I know it's not the best television show that's ever aired - that title probably goes to Battlestar Galactica, although you may think otherwise - but I don't even care. In fact, part of the show's charm is the flaws so plainly on display as we breeze breathlessly from scene to scene. When the clock doesn't stop, when every second counts, there's no time to point and laugh. So, here are 24 reasons I like Jack Bauer and the universe he inhabits. 1. The stakes are always high. Nuclear weapons. Biological weapons. Attacks on the White House. If it can cause catastrophic loss of life, Jack will inevitably have to deal with it. 2. There's a backstory to everything. We know Jack had a covert mission somewhere in his past that made an enemy out of Victor Drazen, played by Dennis Hopper. We know he had a brief romantic relationship with his coworker Nina Myers. Even though events occur in real time from season to season, events also occur offstage, before and between seasons. I would welcome a prequel, in case anyone is listening. 3. The good guys know when they're being bad. You see Jack process his moral conflicts. They show on his face when he's by himself.

TWEET THIS: When the clock doesn't stop, when every second counts, there's no time to point and laugh. http://ctt.ec/jsb9f+ #JackIsBack 4. No one is safe. Long before Game of Thrones started offing every character that kept you watching, 24 was killing everyone you care about. Even Jack dies at least once. 5. No one can be trusted, but you trust them anyway. Jack doesn't have the luxury of not trusting his allies, even though he's been betrayed over and over again. 6. The system works. I've written about this elsewhere. As much as 24 makes an ubermensch out of Jack Bauer, it also celebrates the effectiveness of collaboration and the power of a well-run organization. 7. The system always breaks down. Nevertheless, the institutions and structures we come to trust in 24 are vulnerable to breakdown - sometimes laughably so, sometimes shockingly so. 8. There is room for renegades. In fact, it's the power of the system, coupled with its vulnerability, that demonstrates the logic of a renegade like Jack. Jack knows the ins and outs of the Counter-Terrorist Unit (CTU) as well as anyone, so he knows when it serves the purposes of securing peace and order, and when it gets in the way. He respects the system even when he subverts it. And the system respects him even as it penalizes him for operating outside of it.

What does 24 teach us about checks and balances? Read more here.

9. There are some lines Jack won't cross, but you're never sure this is one of them. The very first scene of 24 I ever saw was in the opening episode of season two, in which Jack shoots a prisoner dead in his boss's office and then cuts off his head. So, that's a line Jack will cross. But will he execute a terrorist's son in order to get information? You just have to wait to find out. Remember to breathe along the way. 10. People are incredibly good at their jobs. Field agents, data analysts, division directors, White House chiefs of staff - the world of 24 is a meritocracy without question. 11. They're still people, which means they still screw up. Jack gets addicted to heroin while on undercover assignment. His colleague Tony Almeda loses his way and becomes an alcoholic who is abusive toward his live-in girlfriend. Nobody's perfect on 24. 12. Love is important. We see the value of each relationship, whether romantic or platonic. 13. Love is hard. We see how difficult it is to maintain a relationship under pressure, how challenging it is to hold our vocation and our relationships in healthy tension.

The gospel according to 24? Read the tongue-in-cheek "Devotional Journey of Jack Bauer" here.

14. Villains are people too. They have families. They have passions and convictions. They have backstories that must be respected. 15. Presidents have hard jobs. Half of each season of 24 takes place in the middle of the night. And the presidents are as wide awake as the field agents with a gun pointed at their heads. They make life-and-death decisions about other people, and they have to live with those decisions forever - and I mean forever; the weight of history as the ultimate judge of presidents is on display in each season. 16. Sometimes presidents are their own worst enemies. On this third pass through 24 I'm realizing how embarrassingly bad these presidents are at their personal lives, how much politics mucks stuff up. 17. Jack is too busy to indulge drama. Jack has as much in his personal life to deal with as anyone else - an estranged daughter, failed and failing romantic relationships, drug addiction, et cetera - but he manages to defer his problems till the crisis at hand is averted. He'll deal with it, but he'll deal with it later.

18. Nerds can be heroes. Chloe and Edgar literally save the day over and over and over again, usually from their keyboard. Edgar stops a nuclear meltdown with the backspace key, for Pete's sake. 19. Nerds can be annoying. Some people are socially awkward. Those people are front and center in the universe of 24. Case in point: Chloe O'Brien, who was told by Division Director Bill Buchanan, "We don't have time for your personality disorder." Now in its ninth season, apparently 24 does have time for her. 20. There are real consequences to our actions. Presidents are run out of office. Agents are arrested and even killed. International conflicts are exacerbated. Loved ones are lost. Jack Bauer is never not aware that his decisions have real costs, to himself and others. 21. Conviction is important. Given how actions have consequences in 24, decisions are made quickly and with conviction. There's no looking back from any decision; the clock always ticks forward, never in reverse. 22. Conviction can be dangerous. Some of those decisions, however, are bad decisions. And when people cannot or will not step back from bad decisions, bad things happen. People die, sometimes a lot of them. 23. Everyone's story is complicated. Jack is a complicated character, but he's only one of a palette full of complicated characters. People whose motives are mixed and whose loyalties are divided. People who have secrets they wished they didn't have to keep. People who wrestle with regrets on a daily basis. These are the people who surround Jack, the people who surround each of us. 24. Life carries on and on and on. Eight seasons have come and gone. Including this new, ninth season, eighteen years have passed. Every crisis chronicled in 24 has come and gone, every character has passed from life experience to life experience. Each story told in each season is only one episode of each character's personal epic. We're reminded of mortality in 24, yes, but we're also reminded of life. There you have it: 24 is about life. And that, above all, is why I love 24. I trust you'll let me know either why you love it, or why I'm wrong.
Email Post