Bow Your Heads and Hit the Streets: International Workers' Day of Prayer

Today is May 1. Happy May Day! Workers of the world, unite! Today is also the National Day of Prayer. Happy Pray Day! Americans, grab a hand and let's go! 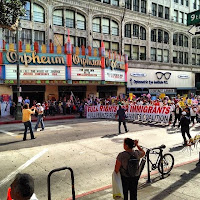 May Day is always on May 1, and while its origins are associated with pagan celebrations of spring, it has in the last century come to be known more broadly as shorthand for International Workers' Day, a day to galvanize and mobilize blue-collar workers and other underclass folks to demand their rights from those who hold power over them. On May Day, the mystical meets the political as we enjoy the spring and take to the streets. The National Day of Prayer is always the first Thursday of May, and while its origins trace back to the earliest days of the U.S. Government, it has only been formally recognized and organized since 1952, and only fixed in May since 1988. It is a day in which people gather in public places to pray for national leaders and the welfare of the nation, while public officials formally acknowledge the value of prayer and religion in the shaping of world events. On the National Day of Prayer, the political meets the mystical as we bow our heads and take to the streets. 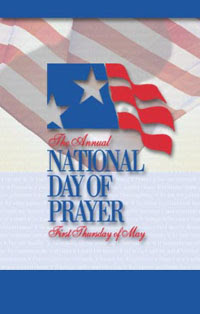 It's entirely possible, although I haven't researched this, that the formalization of the National Day of Prayer in 1952 was related to anti-communist hysteria after the Second World War and at the dawn of the nuclear arms race with the Soviet Union. If that's the case, then International Workers' Day and the National Day of Prayer have ties even deeper and stronger than their position on the calendar and their commingling of spirituality and politics. Workers' unions were feared in the United States as a breeding ground for communism, a place where godless socialists could gain a foothold in the American consciousness. Civic leaders and faith leaders alike saw a common enemy in communism, which was formally irreligious and set against democracy and free-market capitalism. No wonder the U.S. president was calling on everyone to pray; no wonder faith leaders were interceding for those who led the nation. But of course, in the intervening years the godless socialists did not take over the United States; instead, workers gained greater protections from the abuse of power by their companies. And while the United States, like all communist governments, remains officially irreligious, the state of American faith hasn't changed all that much. Instead, both International Workers' Day and the National Day of Prayer have become institutions, fixed points in the national calendar, ceremonial displays with little direct impact on society. In that way both days are quintessentially American. The commingling of the mystical and political - the things of the earth and the things of the heavenlies - and the making of speeches and pronouncements and banners and websites: these things punctuate the slow, mild progress through history of the United States. We are not what we were in 1775, when the Continental Congress asked its constituents to pray on its behalf as it prepared to declare independence from the United Kingdom. We are not what we were in 1886, when police killed four people in Chicago during a demonstration demanding an eight-hour workday. We are never, in fact, what we were; we are only what we are, and we can only hope for what we will become. We do love a parade, though, and we do love to sing. Songs of prayer and praise are many, as are songs that celebrate labor and laborers. So on this day, one of those few where International Workers' Day and the National Day of Prayer commingle, I offer you this excerpt from "Union Prayer," written by Woody Guthrie and performed by Billy Bragg. I actually think we can all get behind it, singing it and praying it even as we take it to the streets.