The Difference Between Law & Order

When Richard Nixon set off on his quest to become President of the United States in 1968, he campaigned on a vision of "law and order." It worked well for him; he won by a wide margin and settled into the first of his two (albeit incomplete) terms as President.

"Law and order" were, at the time, cultural itches demanding to be scratched. The 1960s were characterized by lawlessness, with at least four national figures assassinated in five years: John F. Kennedy (1963), Malcolm X (1965), and Martin Luther King and Robert F. Kennedy (1968). Public bombings and riots were regularly reported on the national news. Public safety was no longer something people felt confident about. Bundled up in the lawlessness, however, was the legitimate protest against institutionalized wrong-doing. The American war in Vietnam had stretched on tragically and interminably, with dubious legitimacy; the object of preventing the spread of communism in Southeast Asia hardly compared to the effort to end genocide in Germany, for example. Meanwhile, back in the States, the Civil Rights Movement continued to face strong resistance from local and state governments, and federal representatives in Congress made slow and inconsistent progress in guaranteeing the basic human rights of people of color. As protesters became more organized and more visible, governments became more panicked and reactionary. By 1968 so regal an exercise as the Democratic National Convention devolved into chaos, as backroom politicians outmaneuvered the more popular pro-peace candidates for the Democratic nomination and instead nominated the pro-war Hubert Humphrey, while hippies protesting in the streets were shown on television being brutally suppressed by the police. Even news reporters like Mike Wallace and Dan Rather got roughed up by the cops, leaving America to wonder who the police were actually sworn to "serve and protect." 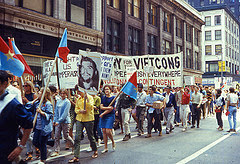 Chicago Mayor and political kingmaker Richard Daley defended the actions of the police during the convention with a now-famous slip of the tongue: "Gentlemen, let's get this thing straight, once and for all. The policeman is not here to create disorder. The policeman is here to preserve disorder." He meant, we presume, "to preserve order." There is, I'd like to propose, a distinction between "law" and "order" as significant as the distinction between "order" and "disorder." They are fundamentally different things, law and order. A law is a codification of the rights of people; it provides a means by which to assert and protect our rights, and to punish those who violate those rights. A law, for example, makes it possible to punish a person for assault, and simultaneously to prevent future assaults out of fear of punishment. A law is judged on its merits: if its enforcement supports people's basic rights, it is just; if a law serves to inhibit people in the exercise of their rights, it is unjust. As Martin Luther King Jr. put it in his letter from a Birmingham jail:

One may well ask: "How can you advocate breaking some laws and obeying others?" The answer lies in the fact that there are two types of laws: just and unjust. I would be the first to advocate obeying just laws. One has not only a legal but a moral responsibility to obey just laws. Conversely, one has a moral responsibility to disobey unjust laws. I would agree with St. Augustine that "an unjust law is no law at all." Now, what is the difference between the two? How does one determine whether a law is just or unjust? A just law is a man made code that squares with the moral law or the law of God. An unjust law is a code that is out of harmony with the moral law. To put it in the terms of St. Thomas Aquinas: An unjust law is a human law that is not rooted in eternal law and natural law. Any law that uplifts human personality is just. Any law that degrades human personality is unjust.

Unlike a legal code, "order" is ambiguous. It is established and secured at the discretion of those in power. Crowd control, for example, is not a matter of law but of order, and it is most efficiently executed by people with the demonstrable power of the state behind it. Police control crowds much more effectively than librarians, for example, because police have badges and flak jackets and guns and the full authority of the state. There is a place for order; we all benefit from the administration of order. But because it is discretionary, it is subject to mishandling and even abuse. And when it is artificially codified into law, it can become a tool of of suppression, of oppression, and ultimately of tyranny. 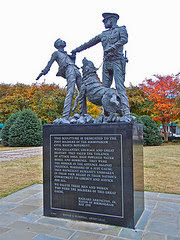 I raise this because I think, after twenty-four years of Law & Order TV franchises, in near-constant broadcast thanks to reruns, we've tended to conflate the concepts of law and order into one irreducibly complex idea. It's this conflation that provides the rationale for preemptive military strikes, for a government sending robots into other nations to kill people, for widespread wire-tapping without warrants.

We want an orderly world, by any means necessary, and if we have the wherewithal to impose order, we will. This conflation makes the notion of legitimate protest more ambiguous; because protests can be disruptive to the normal flow of a day, it is tempting to restore order by any means necessary. The worst, most tragic outcomes of such a mindset are the deaths of people like Jordan Davis, shot to death because his music was too loud for Michael Dunn's taste and because he looked somehow menacing in his car. Michael Dunn wanted the world to be ordered according to his preferences; the "Stand Your Ground" law that gave Dunn's sense of order legal force ironically legalized the death of Jordan Davis.

TWEET THIS: We want an orderly world, by any means necessary. http://ctt.ec/yetjb+ Law and order are tricky subjects, and we are fortunate to have a system of government that is committed to both the rule of law and the value of order. It's up to us, however, to regularly and rightly differentiate between the two: sometimes laws are enacted and enforced to privilege order over basic human rights; sometimes disorder actually serves the cause of justice. Sometimes we're so eager for order that we violate the law to achieve it; sometimes a good law upsets our equilibrium, and it's up to us to adjust to the new reality it creates. Nothing in the news really precipitated this post for me. Just a general sense of category confusion, and a perennial concern that we not lose sight of how easily we can be manipulated, by appeals to nice-sounding concepts like law and order, into accepting acts and systems of injustice and oppression. So, yeah, just a casual post today.
Email Post