Being the Change, Being Yourself

I've started my new job as a telecommuter; after a few weeks I'll shift to working onsite. I was always attracted to the notion of telecommuting - fewer disruptions, plus the acceptability of pajama pants as "business casual" - but my wife wisely warned that I wouldn't take to it. I'm too relational; I miss the group dynamic. So I'm glad I'll soon be entering more fully into my new work environment, but I've been around long enough to recognize that the introduction of a new element to an ecosystem (which is a very vogue way of talking about being a new employee) introduces a fair bit of disequilibrium. And with the introduction of disequilibrium comes a crisis for the collective: who must change, the person or the system?

TWEET THIS: A new element in an ecosystem introduces a crisis for the collective: who must change, the person or the system? This is the old evolutionary dilemma: adapt or die. Except that in this instance we're dealing with human personalities, and to change oneself simply to fit in to an existing culture can feel like the end of a significant part of oneself. In this instance, we contend with a more existential dilemma: adapt and die. Just a little bit. Is that melodramatic? I suppose it is. I'm not going to die just because I can no longer play music through the speakers of my computer as I work from my office. Given the environment in which I'll be working, I'll have to do like one of my new coworkers and wear headphones. Then there's style - another challenge to my existing habits: as an editor, I have to conform my work to the house style guide of my new employer, which, unlike my previous employer, seems to think, that commas, should be used, like, everywhere. 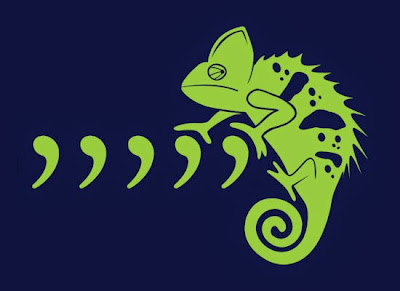 These are survivable adaptations - microevolution, if you will, rather than macroevolution. But there are more inherent, more subterranean cultural markers of any defined network of people - any culture - that present more significant evolutionary quandaries to the new guys among us, and when we come upon them we have to decide how much, how often, and for how long we will adapt to suit. And similarly, we have to gauge how receptive our new environment is to change, and what and where the levers of change are. (I'm sure my new boss has read this far and is starting to panic; I sound a bit like a Bolshevik or something. I'm not. I'm an editor. Although as with Bolsheviks, it's in the nature of editors to change what they're presented with.) Anyway, to prepare myself for adapting to (and, where appropriate, adapting) my new environment, I loaded up on some new books. I picked up Change by Design by Tim Brown, a great read about extending the method of designers from the production of artifacts to all corners of an enterprise - to galvanize imagination and collaboration toward the whole health of an organization. Something like that. It was good. And then I shifted to a book by Debra E. Meyerson: Rocking the Boat: How to Effect Change Without Making Trouble. (Happy, boss? I'm not "making trouble"; I'm just "effecting change." It's all good.) 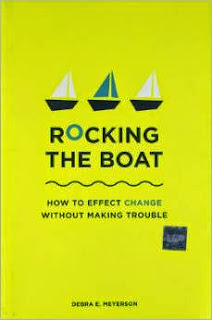 I expected something very different from Rocking the Boat than I got. What I expected was practicality, utility - a method for stirring the pot without landing in the hot seat. I was looking for, I suppose, advice on how to win new friends and influence new people. And there are elements of that in this book, particularly in later chapters. But instead of reading this book and looking forward to my new job, I found myself looking back, through many years, at how I've managed to survive being what Meyerson calls a "positive deviant." "Positive deviants" are those people who don't naturally or comfortably conform to an established environment, and yet they've committed themselves to that environment and seek its good. In the process, they make small strides toward making the environment more receptive to people like them, and other people who are, like them, unlike the dominant culture. I identified immediately with this characterization. It's hard to know why, since most of Meyerson's examples have to do with minority identities in majority settings - people of color, women, LGBT folks. As a straight white man I better fit the profile of the dominant than the deviant. But it turns out that once you've defined a norm, it's hard not to notice the ways in which you deviate from it. It might be more helpful to think rather of "positive deviance" than "positive deviants," since really anyone at really any time can feel like an outsider to the system they find themselves in. But telling a positive deviant that what they're feeling is normal actually does very little good. Meyerson's other term for this type of actor in a system is "tempered radical," one that I greatly prefer. A "positive deviant" has a relatively passive challenge; she has only to come to terms with her deviancy and try to stay positive along the way. "Tempered radical" implies something more active: the challenge facing such a person is to pursue her radical agenda in tempered ways - to make the change she wants to see in the world, as Gandhi sort of put it, causing as few headaches as possible for the people affected by those changes. A "tempered radical" focuses externally, on effective change; a "positive deviant" focuses internally, on not losing sight of oneself. Plus, I'd rather be thought of as radical (or even tempered) than as deviant. Nevertheless, both are good, accurate, helpful terms, and whichever one you identify best with, you're going to need some encouragement. "Most organizations," Meyerson writes, "implicitly reward people for maintaining, not disrupting, the status quo." There's a tyranny to equilibrium; to disturb it is to engender confusion and anxiety, and to invite a suppressive response. If you deviate from the norm - even if you are positive about it, even if your particular deviation offers positive benefit to the environment - there are forces in play that will push you back toward acceptable norms. Any proposed change to your environment, no matter how tempered, will seem radical to some. The tempered radical, the positive deviant, can be seen as oppositional and treated as such; they face the threat of formal punishment or insidious, even subconscious, marginalization.

People who stand out as different face ongoing pressures to prove their loyalty to the majority. One way people do so is to distance themselves from those who are similarly "different."

Yet another way the norm tyrannizes the deviant: the norm pits the deviants against one another. And the deviants play along, because simply by acknowledging their commonalities they establish a new norm, which establishes new deviances, which invites more marginalization. It's stunning how effective we all are at attacking one another's sense of self. Whatever. It's hard out here being a deviant. Shocker. The question is, what are you going to do about it? And how will you, a tempered radical, pursue your radical agenda in appropriately tempered ways?

TWEET THIS: Any proposed change to your environment, no matter how tempered, will seem radical to some. I do wish I'd read this book fifteen or twenty years ago, when I was first facing up to my deviancies, when I was first being radicalized. Not that it isn't helpful in my current season of life, and not that it won't be helpful in my new environment (and, frankly, not that I suffered all that much for being different), but I do think we first contend with these challenges to our identity early on in adulthood, in our earliest encounters with organized environments. John Lennon actually sees this pressure reaching all the way back to our infancy:

As soon as you're born They make you feel small.

The ways we engage our environments with our uniquenesses, with our distinct visions, are cast relatively early and harden into fixed attitudes relatively quickly. Cynicism plagues the tempered radical when an environment resists change; it's increasingly hard for a deviant to stay positive (or recover positivity) when their deviancy is actively, formally discouraged. Indeed, when simply being yourself feels like a battle, when your vision for the future is seen by your host culture as aberrent, Meyerson advises that "it is important to know when to stop fighting and instead look elsewhere." But because so much of tempered radicalism is a matter of identity, because our positive deviancy sets so quickly and follows us forward in life, we also have to be patient, circumspect, resolute and resilient. Meyerson quotes Keith Hammonds to remind us, in a way that is simultaneously inspiring and discouraging, that "Tempered Radicals .. are irritants to their organizations in the way that pearls are irritants to oysters." She goes on:

The capacity to push people to confront the conflicts and adaptive challenges facing a system is one of the most crucial and difficult aspects of real leadership.

In this way, and really in countless other ways, tempered radicals and positive deviants are assets to any environment; the disruption to equilibrium they offer may occasionally be sloppy or produce unintended consequences - they are human, after all - but it unsettles environments that, as often as not, need to be unsettled. I count ninety-five commas in this post. Happy, new norm?
Email Post