Finding Your Voice: Reflections from a Guitarist

Long before he was the guitarist for the Police, Andy Summers was a guitarist at large, first in London, eventually in the United States, touring with bands both known and unknown. One day, after an abrupt and curt dismissal from the Soft Machines that sent him straight into the arms of the Animals, Andy got an invitation to swing by a music studio in LA, where Jimi Hendrix had booked some time to record. 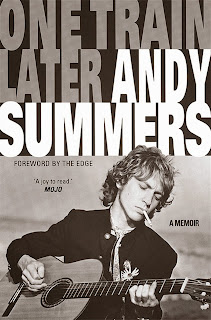 This wasn't Andy's first encounter with Jimi, but it was a more relaxed environment than their earlier encounters, and Andy and his mate passed the time doodling with guitars in a corner. Eventually Jimi came and joined them on bass. They jammed for a while, and then Jimi asked if he could take the guitar, so Andy switched to bass and they kept on jamming. Finally the moment had passed and they all knew it, so they nodded appreciation to one another, and Jimi returned to the recording booth, while Andy returned home. Try to imagine that feeling, sitting alongside the master of your chosen instrument, the universally acknowledged exemplar of your chosen vocation. Try to imagine how you would conduct yourself with him, how you would process the experience afterward. What course would it set you on? What changes would you make to your life? What decisions would such an encounter demand of you? For Andy Summers, this was a moment of truth:

That night when I finally lie down, I know I have just passed through a seminal moment in my life. Jimi is having a huge influence on guitarists everywhere: people are mimicking his style, and little Jimis are springing up everywhere. The Hendrix style is very seductive, and at this moment in the world of rock guitar, it’s hard to resist trying to get all his licks and aping his style. But I wrestle with it because from almost the first moment I began playing the guitar, the one precept that has consistently come at me, been hammered into my brain, held up as the sine qua non of playing music, is the idea that you must find your own voice, you must - in the words of countless musician interviews in the magazines I read as a teenager - "have something to say." Jimi has something to say, but somehow through a combination of natural stubbornness, in-born musical instincts, and the long embrace of the "own voice" idea, the thought of being a Hendrix clone is anathema to me.

TWEET THIS: Imagine sitting alongside the exemplar of your chosen vocation. What decisions would such an encounter demand of you? Andy Summers writes this memoir in the present tense, an interesting quirk for most of the book, but in moments like this the memories crackle with energy. The fact is, so much of contemporary music, of any creative endeavor, actually, is mimicry. We emulate those we admire, and imitation is the sincerest form of flattery. Earlier in One Train Later Andy wrote about the Eric Clapton fever that spread throughout the guitarist community in England, another occasion for him to resist the temptation to co-opt someone else's style. I'm impressed with Andy's capacity to honor those musicians whose innovations he rejects; he doesn't deny the greatness of Clapton or Hendrix or anyone else, he just declines to play their way. There's a cost to this commitment. To continue to seek an elusive voice of your own is to make yourself less marketable; other, lesser artists will happily don the Jimi mask and take the gig you refuse to take. It hurts to not have a voice; you suffer for continuing to search for it. But it's out there, and with patience and vision, you'll find it.

I am in a position [as lead guitarist for the band The Animals] that many guitarists would covet, but inside I have a nagging feeling that it is temporary and that I have not yet found the environment in which I can be the most expressive. . . . Other guitarists I started out with — Clapton, Beck, Page, Albert Lee — are well on their way. Maybe I have been sticking to my own path too rigidly, maybe I should have taken a more obvious route like everyone else, or maybe my time hasn’t come yet. But like anyone, I need the setting in which it can take root. At the moment the partners I am seeking are both still at school in England: one at Millwall in the English west country, the other at St. Cuthbert's grammar school in Newcastle.

TWEET THIS: It hurts to not have a voice. But it's out there, and with patience and vision, you'll find it. The partner Andy sought at Millwall in the English west country was drummer Stewart Copeland; the partner at St. Cuthbert's in Newcastle was bassist Gordon Sumner, better known as Sting. Together they would become the Police, who carved out a unique sound in the 1970s and 1980s by blending jazz, reggae and punk music with smart, literary song lyrics. They've sold over 75 million records and been inducted into the Rock and Roll Hall of Fame, and are included on numerous lists of the greatest artists of all time. Andy Summers eventually found his voice, and it sounded nothing like Eric Clapton or Jimi Hendrix. I, for one, am glad he held out for it.
Email Post