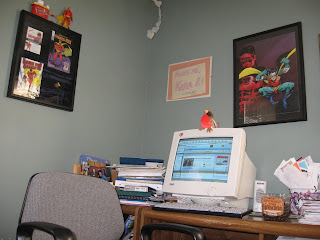 I've been memed by two people, Jenn (with one J) and Pete (with two ees). Jenn wants to know what tunes people are digging lately; Pete wants to see your office space. So here, without further ado, are my responses.
1. Office.
Here's a picture of our home office. Note the superhero stuff on the wall, painted and otherwise crafted by friends along the way. Also note the open container of dark-chocolate-covered espresso beans and the unopened box of Turbo Tax. Believe it or not, I cleaned up a bit before taking this picture.

2. Music.
Most of the new music I've been digging lately isn't all that new. I bought the new Switchfoot (Oh! Gravity!) and actually like it more than I expected; it's pretty rockin, and I'm apparently in a pretty rockin mood. Best tunes are "Amateur Lovers" and "4:12."
Another recent purchase was John Mayer's Grammy-winning Continuum. I'm willing to forgive his fascination with Jessica Simpson because he's so good at writing songs and playing guitar. He takes a great turn on Jimi Hendrix's "Bold as Love" and crafts a wonderfully melancholy consolation song with "The Heart of Life." I wrote at Strangely Dim about the cultural significance of his song "Waiting on the World to Change"; all told, it's easy to see why this record has gotten such high praise.
I've become a big fan of Arcade Fire, though thus far I've only borrowed, never bought. They have unbelievable texture to their music, though they're definitely an acquired taste--as are the Decemberists, who made my last list of good music with their Picaresque album. Their single "Valencia" is OK, but "Crane Wife" is a very moving song.
Finally for now, I've been taking every chance I can to listen to Madeleine Peyroux, who revisions other people's songs like nobody's business. The one on the new album, Half the Perfect World, that really gets me is "Everybody's Talkin'." Listening to her is like knowing then what we know now--a savvy innocence, wounded but healing.
3. Tag!
OK. Red rover, red rover, send Carolyn, Web and Rebecca's current favorite songs and photos of their offices right over.
Email Post
Labels: Arcade Fire Decemberists John Mayer Madeleine Peyroux music office photographs Switchfoot

Web said…
I hereby notify you that my duties as a tagged meme have been fulfilled - you my peruse my response at your leisure.
12:29 PM

Pete Juvinall said…
Some of the lit. references within the Decemberists' music are just amazingly good; as a result of what I've heard recently, they've made it onto my list of 'automatic buys' - artists that produce stuff and I get it unlistened.

Arcade Fire is taking a little time to grow on me. Wake Up is good, but the rest of the Funeral disc is listenable, but there's not been a whole lot of stuff to gravitate to personally.

Have you heard 'Bandit Queen' by the Decemberists? Super fun song to sing along to in the car :).

Jennwith2ns said…
Okay, so what is the etymology of "meme," and how the heck do you pronounce it?

Good list; I hadn't heard all of those, but I had heard some. I feel that I will sound a little suspect to admit that my knowledge of John Mayer, the Decemberists, and Madeleine Peyroux I owe almost exclusively to my place of employment. But maybe it just means I'm finally getting some sort of musical education . . . ?

Becky said…
Are you tagging li'l old me in Michigan? Or were you referring to some other Rebecca?
10:05 AM

David Zimmerman said…
Yep. Sorry--I rushed my way through the post and failed to link to my taggees. Everybody, meet "Re:Becky" in my blogroll.
1:25 PM

Becky said…
Alrighty then. I'm up for the challenge. . . check back tomorrow at pleasepassthecheese.blogspot.com!
2:58 PM